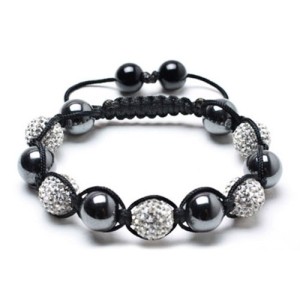 Hematite gemstones have been held in high regard since antiquity and the metallic crystal really captures the eye in jewelry.  The burnished sheen of the semiprecious stone was trusted by the Ancient Egyptians to fortify their blood in this life and deliverr them safely to the next, thus Hematite was a prized asset for members of high status. Its magical powers to align body, mind and spirit is still recognized today and is a popular presence amongst members of the new-age movement.

Description:  Hematite is a stunning silvery gray gem that shines like polished metal.  In certain light you will catch glimpses of the red that gives this sophisticated gemstone its name. It gets it’s color from the high iron ore content that constitutes about 70% of the gem.
Pow
er Qualities of Hematite:

Color:  Hematite is found in silvery grays that morphs into an almost petrol black effect, so much so it has the appearance of metal. It will often have a slight rust tinge to it.

Birthstone:  Hematite is the birthstone for both the signs of Aries and Aquarius. 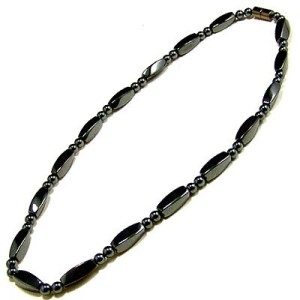 The Healing Qualities of Hematite Stone:  Hematite is called the stone of the mind and aids memory, triggers the imagination and inspires innovative thoughts. Mathematicians and scientists benefit from the energy of hematite as it sparks logical thinking.

It is a stone associated with the blood and is often used to sooth leg cramps and remove blood clots. It also aids absorption in the blood to prevent anemia. Hematite is also known to have a calming effect on people who have a fear of flying and is used to treat people who cannot sleep because of Restless Legs and Ekbom´s Syndrome.

Mystical Powers of Hematite:  Hematite helps you to understand your relationship with the planet and is known to build self-esteem and overcome shyness. Hematite is believed to protect the vital energies and help the dying find a safe passage to the afterlife.

The History of Hematite Stones:  The Romans used hematite as a seal to protect warriors in battle.  It was believed that the stone contained the blood of generations of brave warriors and had been formed by the spilled blood in battles long gone. Its red color appears during polishing when red powder turns water blood red, prompting craftsmen in the Middle Ages to give it the name, Blood Stone.

A recent excursion to Mars discovered hematite in abundance and is one of the causes for it red appearance.  It is believed that analysis of the gem will help provide clues as to whether water could have flowed there. If so, then hematite could hold the key to discovering if Mars could have ever sustained life.

The Name’s Origin:  The name Hematite (or also seen as Heamatite) comes from the Latin word meaning blood, referring to the red appearance of the powdered stone. 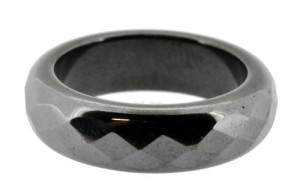 Care and Treatment:  Hematite diffuses negative energy and then absorbs positive energies from other stones. To discharge this stone, let it sit among other tumbled stones.

Hematite Around the World:  Hematite is usually found where there has previously been water, hot springs or volcanoes. The most important deposits of hematite are found by Lake Superior in the northern parts of America. In South America important deposits include Minas Gerais in Brazil and Cerro Bolivar in Venezuela whilst Labrador and Quebec also contribute the world´s supply of Hematite.

The Ideal Gift:   Unlike most gems Hematite has a very masculine energy to it.  Its appearance also lends itself very well to men´s jewelry. Interestingly scholars of math and science can often be the quieter, more introspective types supposedly helped by this stone.  Jewelry made from hematite will coax a new student out of his dorm and give him the confidence to engage in a more active social life.

Anyone with blood disorders or pains in the legs would appreciate the energies of this gemstone, especially anyone who is traveling long distance and could contract thrombosis.

Purchase Your Hematite Stones:  You can purchase Hematite gemstones in a beautiful collection of jewelry and amulets from BlueNile and Amazon.