Citrine emits a wonderful golden-yellow hue which dazzles and delights. This much sought after gemstone is an affordable alternative to the more expensive yellow sapphire and yellow diamond. This gem is guaranteed to bring joy to your life, promote happiness, and bring you peace and wisdom.

Citrine is most commonly transparent and valued highly for its yellow-brown color like the leaves in fall. This precious stone is a coarse-grain variety of the silica mineral quartz and is highly prized for its yellow to brownish color and its resemblance to the rarer topaz for which it is sometimes mistaken.

Color: Citrine´s are found in a pale yellow color to Madeira orange. In all of its glory, and the most enamored is it startling golden yellow hue which is caused by the strong presence if iron. The deeper the yellow color, the higher the grade and the more expensive the stone.

Varieties: Citrine is found in several different varities depending on the color. A member of the quartz family it is hardly surprising to note that it resembles several of its siblings, most closely the amethyst stone though this is more usually found as a purple color rather than the striking yellow of citrine.

Milky quartz and rose quarts evoke a cloudy white and reddish pink respectively, whereas Prasiolite has a distinct leek-green finish.

Birthstone: Just as with its lookalike, Topaz, Citrine is the traditional birthstone of Scorpio‘s. Find a gift for him or her! 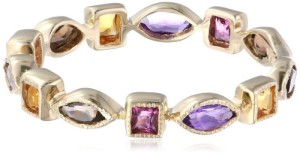 Wedding Anniversary: Citrine is the anniversary gemstone for the 17th year of marriage.

The Healing Qualities of Citrine Stone: Citrine is a very powerful and useful healing stone and has a number of properties that help to ease everyday complaints, particularly in the older generation. It is excellent for improve the blood circulation and will also help the digestive system together with loss of memory. It most compelling quality however, is its ability to dispel depression and can prevent self-destructive people from harming themselves or ruining a good situation they have earned themselves. It is also known to remove toxins from the body and can be used to cure drug and alcohol abuse. It will also improve eyesight and help people who have problems with their thyroid.

Types of Citrine Used for Healing: Yellow citrines are naturally used for healing as their warm energy exudes the warmth and power of the sun and will help to revitalize emotion on people who are experiencing depression.

The Mystical Powers of Citrine: Citrine is known for removing melancholia and lifting spirits thus symbolizing the sun and bringing with it light-hardheartedness, joy and happiness. Citrine is a great protective talisman as it calms and soothes the mind from negative thoughts and replaces them with peace and wisdom.

It especially gifted for stimulating the mind and can act as a bridge between the higher mental body and dimensions of spirituality. In a similar capacity the gemstone evokes creativity and is known to motivate writers, artists and other creative profession. 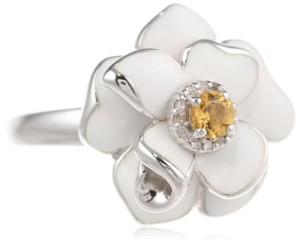 The History of Citrine Stones:

The use of Citrine can be traced back as far as the Hellenistic period of ancient Greece between the 4th and 1st century BCE. It has been revered throughout history, mainly due to its rarity. The Romans were big fans of Citrine and used it to make lavish items of jewelry and intaglio. In the 20th Century, when the art movement was attempting to steer a different cause, Citrine was the gemstone of choice for many artists promoting Art Deco

and to get their work noticed made elaborate and inspired pieces of jewelry for the major Hollywood stars of the day including Greta Garbo and Joan Crawford.

The Name’s Origin:  The name citrine is derived from the French word citron, meaning lemon.

Care and Treatment: Like most other semiprecious stones Citrine can be scratched easily and care should be taken when wearing and cleaning. Citrine permanently changes color under prolonged exposure to sunlight so should not be worn on sunny days if you are going to be outdoors most of the day.

Citrine Around the World: Citrine is found in Russia, Madagascar, Spain, Uruguay, Scotland, the states of California, Colorado, North Carolina, Georgia, and Nevada in the USA.  The gem is mostly mined in Brazil.

The Ideal Gift: Citrine is the ideal gift for friends who may be going through a difficult period and are feeling low, particularly if they have self-destructive tendencies.