Chalcedony has many qualities as it is part of a large family of semiprecious stones. It is particularly noted for absorbing negative energy and replacing it with light-heartedness and optimism, eases self-doubt and promotes awareness. It is also good for helping people with language skills do if you are learning a new language or regularly get tongue-tied get a chalcedony stone to help you overcome the problem.

Description:
Chalcedony comes in many forms and colors and is a fibrous quartz mineral which is often finely crystallized. It is also found in several places, mostly around volcanic or sedimentary rocks, rounded crusts and instalactites. Chalcedonic pseudo-morphs with other minerals particularly the strong physical properties found in quartz.
Power Qualities of Chalcedony Healing Stones:

Color: Chalcedony can be found in every color of the rainbow. It´s most common form is pale blue, yellow, brown or gray with a wax-like finish.

There are many healing stones which fall under the Chalcedony family tree including agate, jasper, bloodstone, cornelian and onyx. Blue Chalcedony is associated with expanding the mind to help the creative thinker formulate new ideas.

Chalcedony is the birthstone for Sagittarius. Find a gift for him or her!

Wedding Anniversary: Chalcedony is the symbolic gemstone for the 12th year of marriage. 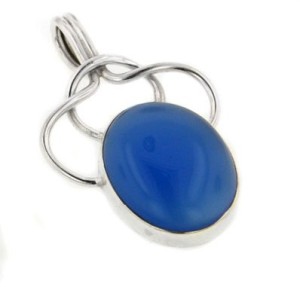 The Healing Qualities of Chalcedony Stone: When used for healing purposes Chalcedony in its pure form is used for release fear, hysteria and depression and replace it with optimism and light-heartedness. It is also used to reduce fever and heals the eyes, gallbladder, bones, spleen, blood and circulatory system. Chalcedony is the best healing stone for stiff necks and problems with the tonsils and vocal cords. Boil Chalcedony in water with a pinch of salt and it will fix a hoarse voice.

Types of Chalcedony Used for Healing: All forms of the Chalcedony stones are used for healing and cover a wide range of physical and emotional problems. We recommend you read about the healing properties in the individual stones of agate, jasper, bloodstone and onyx.

Chalcedony Mystical Powers: Chalcedony is often worn to promote calmness and prevent touchiness, hostility and anger. Chalcedony also stimulates creativity and will foster a balance between body, mind and spirit.

Blue chalcedony is a stone with a gentle energy that feels a bit dreamy. It fosters balance between mind, body and spirit. It is a stone of calm and peace that reduces or negates hostility, anger, and irritation. Blue chalcedony soothes and fosters mental and emotional stability and can engender emotional honesty.

The History of Chalcedony Stones: Chalcedony was prized by the Romans who used them to make seals. It was during the Renaissance the these gemstones were used more often for healing when it was discovered they had magical qualities that could help aspects of people´s health, yet other types of Chalcedony had been used in healing for centuries.

Victorians used Chalcedony for ornamental purposes, carving them into cameos and intaglios and crating many colorful and beautifully polished ornamental stones. In Florence it was commonly used in mosaics in tabletops and small wall panels. 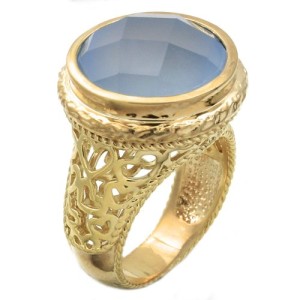 The Name’s Origin: The name “chalcedony” derives from calcedonius, the Latin word used to translate the Greek word khalkedon, which is quoted once in historical documents – in the Bible, although there is some dispute as to whether the name of the city has anything to do with the gemstone.

Care and Treatment: Chalcedony should be protected from scratches, sharp blows and extreme temperatures. Clean it with a soft, dry cloth rather than using cleaning chemicals.

Chalcedony Around the World: Chalcedony is found in many parts of the world, but the most prized comes from India, Madagascar, Burma, Brazil, Mexico & USA.

Chalcedony is the ideal gift for people who suffer from low self-esteem and lose their anger or patience easily. Smokers will also be grateful to receive such a gift, particularly if they are having respiratory problems.