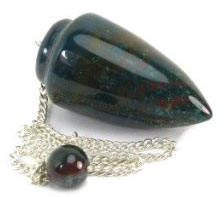 Bloodstone Make You Knowledgeable About the World
Historically bloodstone has been used as a form of protection against the evil eye, but is more commonly used today to give you insight and understanding about worldly affairs. Recognized for its magical qualities and powerful healing ability this impressive semiprecious stone is something that legends are made of – literally as the bloodstone is said to have formed from the blood of Jesus. Bloodstones are found in all kinds of jewelry, amulets and talismans.

Description:
Bloodstones are a part of the chalcedony family. It is predominantly a green heliotrope mineral but has flecks of red and brown in it that resembles spots of blood which is where it gets its name. Experts will tell you Bloodstone is a green siliceous stoned sprinkled with nodules of red jasper and is also referred to as heliotrope. It is the iron minerals that cause the deep red and brown coloring.
Power Qualities of Bloodstone Healing Stones:

Color:  Bloodstone is a green mineral with red bloodlike spots. It is most common in dark shades of green, and has red, brown and sometimes multi-colored flecks.

Varieties:  Bloodstone is a variety of Jasper gemstone that belongs to the Quartz family.

Birthstone:  Bloodstone is the traditional birthstones of Pisces, birthdays between February 19th and 20tht March. Find Pisces gift for him or her!

The Healing Qualities of Bloodstone Gems:  Bloodstone is a blood purifier and improves circulation. It works well for the digestive system as it relieves stomach and bowel pain and also has a positive influence on the bladder. In ancient Greece and Rome, bloodstone was used to treat patients who were hemorrhaging by placing a stone over the wound and was often used as a talisman to guard against nosebleeds. 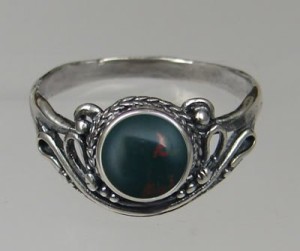 Types of Bloodstone Used for Healing:

Both mystics and physicians hold the crystal form of bloodstone gems in high regard. They attribute a great deal of the gems healing powers as a force of nature which help energy release blockages and purifies the blood. It is widely accepted that bloodstone wards of common ailments such as flu, cold and other allergies. Bloodstone is still widely used as a medicine in parts of India in a pulverized version of the gemstone.

Bloodstone help you understand life events and give you insight into the metaphysical meaning and make you more knowledgeable in the ways of the world. It is thought to have special magical powers that can help you with spiritual growth and development.

The History of Bloodstone:  Bloodstone has been used for making jewelry as far back as ancient Egypt, and in the Middle-Ages was believed to have magical powers. The flecks of red in the bloodstone were said to be from Jesus after he was stabbed in the side by the spear of a Roman soldier and his blood fell on to some green jasper that was at the foot of the cross. Depictions of the gem were subsequently used in sculptures to represent flagellation and martyrdom.

The Name’s Origin:  The bloodstone is also called Heliotrope which comes from the Greek word meaning sun and turning. It gets its name bloodstone because the red and brown flecks resemble drops of blood. 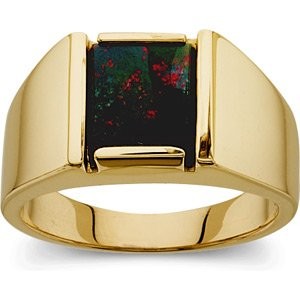 Care and Treatment:  Bloodstone scratches easily and care should be taken to prevent it from receiving sharp blows, cleaning chemicals and extreme temperatures. Also, never wash the gem with water as the polish will come off. The best way to clean bloodstone is to wipe it with a soft, damp cloth

Bloodstone Around the World:  Bloodstone is found in Australia, Brazil, China, India, Kathiawar Peninsula and the US state of Wyoming.

The Ideal Gift:  The bloodstone is an ideal gift for somebody who is embarking in a spiritual journey as it will help them come to terms with a metaphysical presence and understand the workings of the world more easily. It is also useful for people who suffer from nosebleeds, stomach and bowel pains.