Turquoise is found deep seated in many cultures and rightly holds the name “Gemstone of the People.”  Believed to protect and bring good health turquoise has been revered throughout the ages and is still a popular gemstone today.

Turquoise is an opaque gemstone comprised of hydrated copper and aluminum phosphate and has a verdigris hue.

Color: Usually turquoise, as you would imagine, although the shades vary in depth and run through the spectrum of blue-greens to green-blue.  It is also possible to find sky blue turquoise, but these gemstones are very rare.

Varieties: When there are inclusions of iron in a turquoise gem this will create a yellow turquoise gemstone.

Birthstone: Turquoise is the birthstones of Sagittarius, the Archer. Find a gift for him or her! 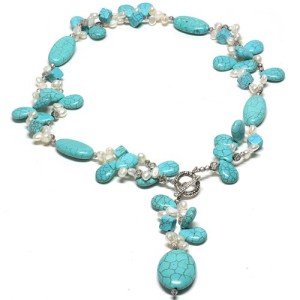 Wedding Anniversary: Turquoise is the anniversary gemstone for the 5th year of marriage.

The Healing Qualities of Turquoise Stone: Turquoise stimulates the regeneration of tissues and so will help people recover from an operation or serious illness. It helps the body to neutralize acidity so is useful for sufferers of gout, rheumatism and stomach problems. It has an unusual quality of taking on the characteristic of the wearer. When passed on through the generations so does the essence of its owner. Gem healers will explain that rather than the stone coming to know the wearers needs, a person should take time to understand what is offered by turquoise.

Types of Turquoise Used for Healing: Yellow turquoise promotes communication and cuts through the honesty of a situation.

Turquoise Mystical Powers: Turquoise brings tranquility and peace of mind and will instil harmony to family life. The properties of Turquoise have a resounding effect in reconciliation of hostility and will prevent arguments and petty quarrels. Its magical properties allude to bravery and will give you direction in your ambitions as it provides insight and consistency of thought.

The History of Turquoise Stones: Turquoise has been found at burial sites that date back 7000 years.  It features predominantly in Native American Indian culture and was used extensively by the Aztecs and the Ancient Egyptians before them.

The legends of Native Americans describe how they dance and rejoice as the rains came down.  Their tears mixed with the rain seeped into Mother Earth and created the “Sky Stone.” They recount tales of how the trickle of blue was the imagery of sky and water in stone.  To them turquoise is the connector of Sky and Earth, bestowing blessings of good fortune and protection.

Look down at this gemstone and see a crack or inclusion running through and the Native American will explain how the gem protected you from a knock in life. They say “The stone took it” for you. Turquoise is common in Native American jewelry and became very popular in the 1880s when Navajos started to create commercial “White Man Jewelry,” set in silver surroundings.

In the early 20th century, the excavation of the tomb of the Egyptian Pharaoh, Tutankhamen uncovered many treasures made from turquoise.  The gemstone was worn by all Egyptians to protect its wearer from unnatural death. It was told that the stone changed color to predict impending doom. Later analysis has shown that the color change is likely to be a reaction to acidity in the skin or cosmetics.

The Aztecs prized turquoise higher than gold, fashioning their arrowheads from the stone. It was said to imbue “The archer dead aim.” They also used Turquoise to decorate their pyramids and temples.  They even studded the teeth to protect their mouths from imbibing poisons.  Elaborate horse bridles protected both beast and rider from falls. In the Western world, Turquoise did not achieve prominence until the 14th century.  The decline of the Roman Catholic Church bought about a surge in secular jewelry triggering a fascination for the exotic looking turquoise. 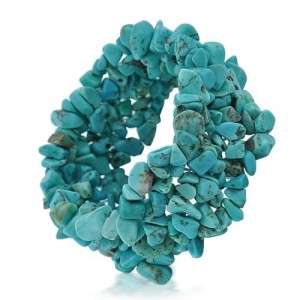 The Name’s Origin: The word turquoise is thought to originate from the French word meaning Turkish.  Having been mined in Iran and traveled through Turkey, its source was often mistaken.

Care and Treatment: The stone’s color and luster will fade when exposed to excessive heat or various weak acids. Wash in cold water with no detergents. Store in the dark and protect from damage as it is relatively soft stone.

Turquoise Around the World: The most highly prized turquoise comes from Neyshabur in Iran. Native American Indians have been mining their treasured gem from deposits in the southwest for many centuries. Deposits are also found in northern Africa, Australia, Siberia, and Europe.

The Ideal Gift: Turquoise is a lovely talisman to give as a gift as it imbues good fortune and health. Considering its effect on acid in the body, give it to the new exerciser suffering from aching joints.