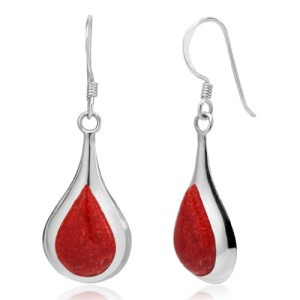 Coral is a contemporary gemstone that is yet to catch on in a big way in the modern world despite being much sought after in ancient time. Why not lead by example show this charming blood-red gemstone to the world by being among the first to sport this deep red beauty in a ring, necklace or pendant. And if you do you will attract money as coral stones are known for improving financial stability.

Description: Coral is the skeletal material of calcium carbonate and grown naturally has a distinctive wood grain. It comes in a variety of colors which are influenced by the organic calcium carbonate that make up the compound.
Power Qualities of Coral Healing Stones:

Coral is offered in a range of colors, but the most valuable, thus most sought after is the red and is the coral stone most found in jewelry. Gem coral occurs naturally in the sea beds around the world and is found in white, pink, orange, blue violet, gold and black.

Varieties: There are several varieties of coral gemstones though the best quality are the red sea corals that can be found in the Mediterranean Sea on the south coast of Italy, the Red Sea and around Japan. The pink coral which is also found in the Med, parts of Asia and Hawaii is becoming a gem of some distinction and blue and black corals could well be an emerging commodity sometime in the near future.

Birthstone: Coral is the birthstone for late March-April and late October-November. Find a gift for Aries or Scorpio! 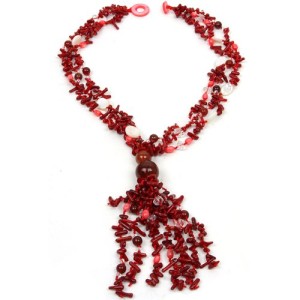 Wedding Anniversary: Coral is the anniversary gemstone for the 35th year of marriage.

The Healing Qualities of Coral Gemstone: Coral is used by healers treating patients that are experiencing difficulties with their lungs and digestive systems. It also gives the heart some life force to improve blood circulation and also has a reputation for lifting depression and lethargy.

Types of Coral Used for Healing: When coral is used for healing purposes it is not unusual for it to be mixed with other medicinal ingredients to make a powerful compound. Mix it with honey to treat the first stages of tuberculosis where as adding a paste to rose water or kewra water and rubbing it into the naval of a pregnant woman will protect the child from miscarrying.

Mystical Powers of Coral Gemstones: Coral is most often used in mystical healing as it has an empowering affect on emotions. It promotes wisdom and is sometimes used to cure madness and sis said to avert accidents and warfare.

The History of Coral Stones: Despite being acknowledged as a contemporary gemstone Coral is mentioned in ancient Vedic texts of India that date back thousands of years prior to the dawn of known civilization  It represented the nine planets and was believed to have a cosmic influence on earthlings and was thus central to the ancient Indian philosophies of astrology. The Romans were also using the stone in jewelry almost 2000 years ago and was popular in jewelry. In modern time Italy have claimed a commercial monopoly on coral stone which is why the gem is not widely known throughout the world, but is gradually making a name for itself.

The Name’s Origin: Precious red corals are given the name corallium rubum, a Latin word derived from the Greek Koralliom.

Care and Treatment: Coral is especially fragile and should be careful protected from scratches and should be kept in a separate box of their own. You should also avoid extreme temperature changes and do not clean them with home ultrasonic cleaner. Instead use a dry, soft cloth. If coral is broken it loses it mystical and healing qualities.

The Ideal Gift: Coral would make an idea for somebody who likes fashion and unique items of jewelry or penchants. If you have a friend who is experiencing depression coral will help lift them from their gloom, likewise if you have a friend who is accident-prone, coral will protect them from harm. If you know anybody who has a problem with the lungs or their digestive system they too would appreciate a beautiful gift of coral.